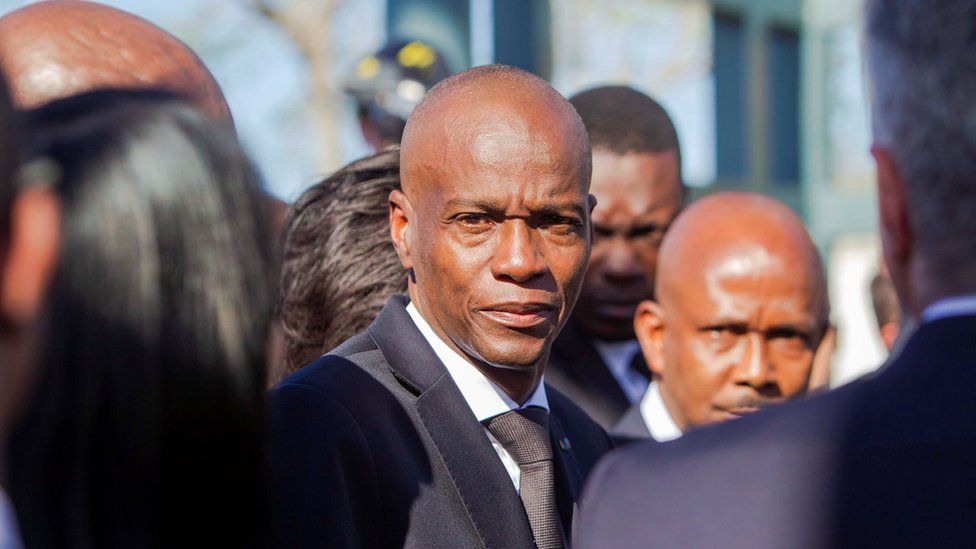 President Jovenel Moïse was assassinated at his private residence in Port-au-Prince, after it was stormed by armed men in the early hours of 7 July.

The President was reportedly shot 12 times, and succumbed to his injuries at the residence, which was heavily vandalised. First Lady Martine Moïse was also injured in the attack and remains in serious condition after she was transferred to Miami for treatment. Officials say that their three children are in a “safe location.”

Reports have emerged of men dressed in black carrying high-powered weapons speaking in Spanish and English, who may have pretended to be members of the US Drug Enforcement Administration. Videos purporting to be of the attack have also been circulating on the internet. Haiti’s ambassador to the US, Bocchit Edmond, said that the DEA link was likely a ruse to create confusion as the attack unfolded.

Assuming control of the country, Interim Prime Minister Claude Joseph called the killing a “heinous, inhuman and barbaric act,” and said that “all measures had been taken to guarantee the continuity of the state.” In an address to the nation on the National Television of Haiti (TNH), Joseph declared a country-wide state of siege under article 149 of the constitution. The order allows police and security forces to enter homes, control traffic and bancertain gatherings; measures Joseph says will “permit the arrest of the assassins.”

However, there are some questions about Joseph’s legitimacy, given that President Moïse had named a new Prime Minister,Ariel Henry, only days earlier, though he had yet to be sworn. According to reports, the constitution says the President of the Supreme Court should take over in the event of a presidential vacancy, but with that position also vacant, amendments suggest the Prime Minister should assume control. The UN Special Envoy for Haiti, Helen La Lime, has said that Joseph should lead the country until elections are held.

Within a day of the assassination, the Interim Chief of Haiti’s National Police, León Charles, announced that an operation had resulted in four of the suspected assassins being killed during a gun fight, while six others were arrested. Three police officers being held as hostages were also freed. “We have the physical perpetrators in hand, and we are looking for the instigators,” Charles said at a press briefing.

At the time of writing, 17 suspects have been arrested, and three have been killed in confrontations with police, while eight more remain at large. Of the 28 alleged assassins, Charles has identified 26 as Colombians and 2 as Haitians with US citizenship. According to the BBC, the government of Colombia has confirmed that “at least six of the suspects appeared to be retired members of its military.” The US Department of State has yet to authenticate the citizenship of the 2 Haitian-Americans in question. US and Canadian media reports name one of the US nationals as James Solanges, who briefly served as a privately-contracted “reserve bodyguard” at the Canadian Embassy in Port-au-Prince. Global Affairs Canada, the country’s foreign relations ministry, confirmed the reports, without mentioning Solages by name.

Meanwhile, Dominican Republic President Luis Abinader has ordered the border between the countries be closed and the military to launch “Operation Gabion” to coordinate emergency actions,to prevent the exodus of Haitians to Dominican territory and possible disturbances due to the fall-out from the assassination. According to the Colombian newspaper, El Tiempo, four of the Colombian suspects flew from Colombia to the Dominican Republic on 4 June, and then crossed overland into Haiti on 6 June.

World leaders have reacted to news of the assassination with widespread condemnation. Through its Foreign Minister, Jean Yves Le Drian, France (which has had a chequered relationship with Haiti dating back to its independence) condemned the “cowardly assassination.” “All light must be cast on this crime that took place in a deteriorating political and security climate. I call on all actors in Haitian political life for calm and restraint,” Le Drian said in a statement.

President Joe Biden said that the US is “shocked and saddened by the horrible assassination of President Jovenel Moïse and the attack on the First Lady, Martine Moïse, of Haiti.” In a CNN appearance, White House Press Secretary Jen Psaki said that, “The message to the people of Haiti is this is a tragedy, it’s a horrific crime, and we’re so sorry for the loss that they are all suffering and going through as many of them are waking up this morning and hearing this news.” She later reiterated the US’ desire for elections to be held in 2021 as planned.

“I am shocked and saddened to learn of the death of President Moïse. Sincere condolences to her family and to the Haitian people. It is a heinous act, and I call for calm at this time,” UK Prime Minister Boris Johnson said in a statement.

In the Caribbean, Heads of Government of CARICOM met in an emergency caucus to discuss the bloc’s response. Current Chairman, Prime Minister Gaston Browne of Antigua and Barbuda, condemned the attack on behalf of the sub-region. “CARICOM will continue to work in close cooperation with the Haitian people, the United Nations, the Organisation of American States, and the governments of France and the United States, in bringing a reasonable settlement of the state of uncertainty and instability that now threaten the peace and security in Haiti and our Community as a whole,” he said in a statement.

Moïse had been in power since February 2017, after his predecessor, Michel Martelly, stepped down. His time in office was tainted by allegations of corruption and constitutional challenges about when his term should end. The opposition said that the five-year term should have ended on 7 February 2021, five years to the day of his taking office, but Moïse argued that he had one more year to serve. He continued to rule by decree, despite widespread objections. The country had been in a state of acute unrest for several months, with often-violent anti-government protests and gang wars becoming commonplace.