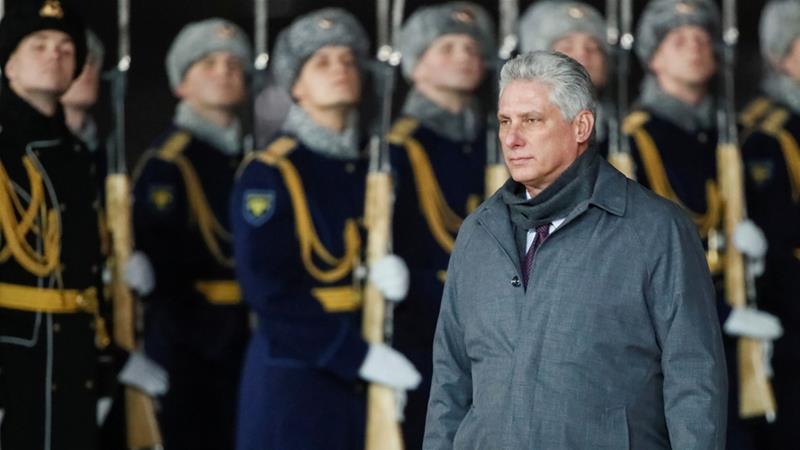 In a visit full of symbolism, indicating a geopolitically significant but more economically pragmatic relationship than in the recent past, President Díaz-Canel and President Putin met on 2 November in Novo-Ogariovo, Putin’s country residence near Moscow.

According to the Kremlin, the two Presidents “discussed prospects of further consolidating the Russia-Cuba strategic partnership in different spheres as well as topical issues on the international agenda”.

President Putin was quoted as saying that the two countries permanent contacts continued at the highest levels and that they were actively cooperating and supporting one another in the international arena. “Russia has always had a particularly good understanding for Cuba’s independent stand and sovereign policy”, President Putin said.

In his published remarks President Putin indicated that trade with Cuba had grown by 33% and noted that “taking into consideration the conditions which Cuba finds itself, it was on the whole coping well with the far from easy to solve various economic and social issues it was facing”.

On its official website the Kremlin also reported Díaz-Canel’s comments to the Russian President.

It quoted the Cuban President as saying that the visit to Russia was important as a working visit, and that his first foreign visit to Europe in 2018 to Russia had been “a sign of the priority of our relations” (Cuba Briefing 2 November 2018). The Kremlin also reported Díaz-Canel as saying that the “very interesting and positive” October visit to Havana by Russian Prime Minister, Dmitry Medvedev, (Cuba Briefing 7 October 2019) was marked by the fact that it had taken place at “challenging times when the United States is escalating its aggression against Cuba”. “This visit showed that Russia and Cuba’s positions remain unchanged under threats from the United States”, Díaz-Canel told Putin.

In a further indication of the value Cuba places on the importance of Russia’s growing geopolitical role, President Díaz-Canel was quoted by the Kremlin as saying; “I would like to say that there are moments dedicated to Russia in our daily routine and feelings. Primarily, because we are closely monitoring the growing role that Russia is playing in order to break the superiority that the United States is trying to establish”.

On closer economic and trade relations, Cuba’s President said that during his three-day visit to Russia he had the opportunity to share Cuba’s thoughts on bilateral projects discussed previously including the implementation of projects and future areas of cooperation.

“New areas of cooperation are opening up. We devoted part of our visit to gaining information about these issues. This is also why we visited the Baltic Shipyard in St Petersburg. Our Minister of Energy visited the Leningrad Nuclear Power Plant. We have ideas and proposals that we will work through together”, the Kremlin reported President Díaz-Canel as telling President Putin.

In a demonstration of the continuity of their political ties, both countries stressed the warm relationship between former President Raul Castro, now First Secretary of Cuba’s Communist Party, and Russia’s political leadership.

Cuban reports separately indicated ‘the full coincidence of both governments in the main topics of the international agenda’ and Cuba having ‘received the unconditional support of Russia in its struggle for the lifting of the blockade (US embargo) and the rejection of the new measures of the Trump administration to economically asphyxiate the island’. They also laid stress on the prospects for Russian tourism.

During the visit which included meetings in St Petersburg, Díaz-Canel met with Russian Foreign Trade officials and business leaders from banking, transportation, oil, tourism and the automotive industry.

Cuban media reports say that at the meetings issues discussed included access to sources of financing for Cuba’s exports of services and the import of fuels, and the export to Russia and its regions of pharmaceutical and biotechnological products, fresh fruits and other agricultural products. The exchanges also centred on the use of the Rouble in financial transfers between both countries, a pilot test with credits in the currency, and Russia’s experience of an alternative Russian system to the Swift banking payments system. At a working breakfast representatives of the oil companies Rosneft and Zarubezneft reportedly outlined their interests and plans in relation to Cuba.

Díaz-Canel also met with the head of the Russian Orthodox Church, Patriarch Kirill, who is close to Cuba, President Putin and Pope Francis.

Although Russian-Cuban trade mostly consisting of Russian exports has more than doubled since 2013 to an expected US$500m this year, much will now depend on turning the political will into positive economic outcomes for both nations and the willingness of Russian business to explore the opportunities available and to establish viable financing arrangements.